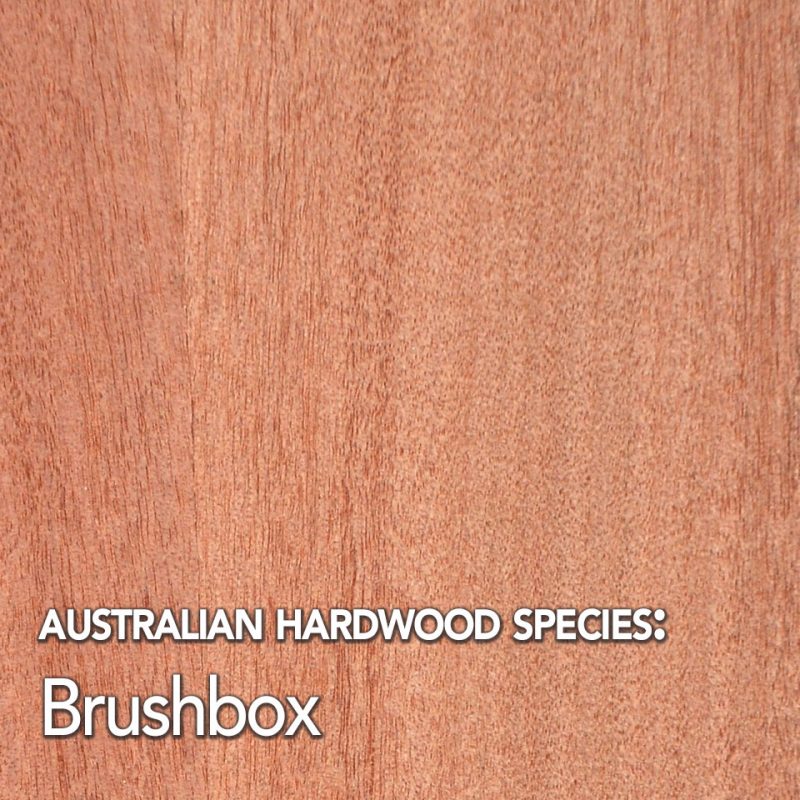 A native Australian evergreen, brushbox is also commonly cultivated in other regions such as the United States. Often referred to as vinegartree, box scrub, pink box, Brisbane box, or Queensland box, brushbox can be found all over eastern Australia as a city tree. Brushbox grows naturally in coastal Queensland and in the northeastern reaches of New South Wales.

Capable of reaching heights of 40 meters and higher in the wild, Brushbox is highly resistant to pests (especially termites), disease, drought, and provides dense foliage that shades as well or better than eucalyptus trees.

Part of why it’s a popular tree in locations such as Perth, Melbourne, and Sydney, Brushbox is also highly tolerant of pruning to keep it out of the way of power lines, unbothered by smog and pollution, and tends to not drop branches on the heads of passersby nearly as often as other city trees like eucalyptus.

As a building material, Brushbox’s fine, even texture and its rich colours ranging from anywhere between reddish brown and pale, greyish pink makes it perennially popular. Its lack of gum veins makes it a fantastic choice for flooring, as its grain is naturally unblemished and makes for excellent solid timber or engineered floors. However, be aware that sapwood is much paler than heartwood, providing for some interesting variations in hue.

Brushbox is ultra-durable thanks to its average 9.5 Janka hardness rating and its dry density of 900 kg/m³. Its natural termite resistance is also an excellent bonus when it comes to using it as a construction material. As with every type of wood product, natural variations and imperfections in Brushbox are always a possibility; these variations are often thought of giving flooring timber added charm and individuality rather than seen as detractors, though – especially when it comes to interesting grain or coloration patterns.

These properties are only a guide, as timber is a natural product there will be variations within any species. The Janka Dry Hardness rating measures the hardness of the wood. The higher the number the harder the wood.

Use Brushbox timber species in your next project

If you would like to use Brushbox in your next project and need assistance with either choosing the correct flooring panels or the installation of your next flooring project then please get in touch with one of our flooring specialists using the form below.

We also offer a more personalised service for those looking for renovation advisory where our team come to your location and help you choose the best species and style to fit the room.

We would love to hear from you!