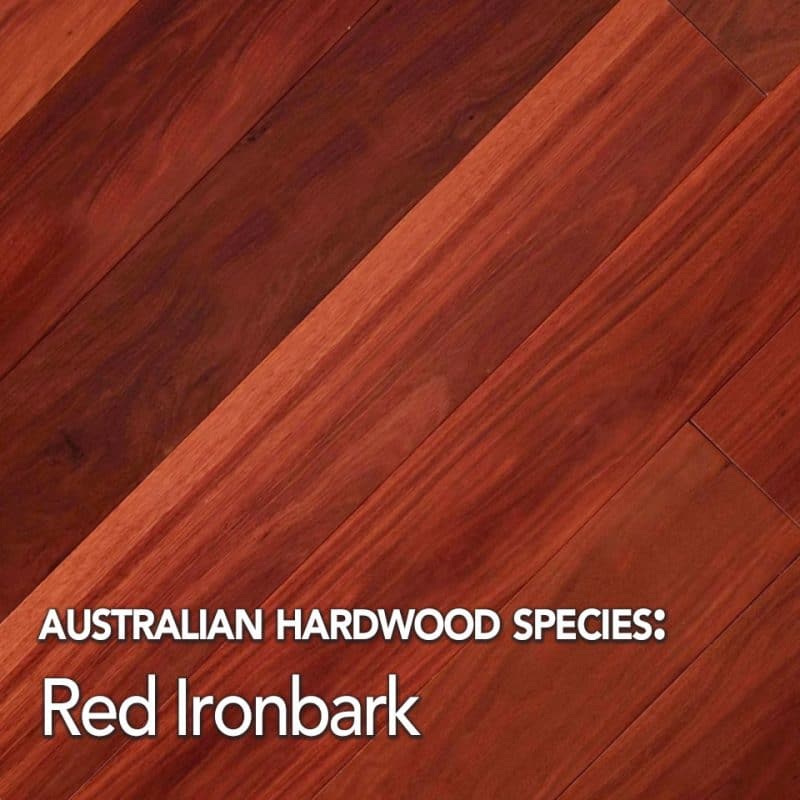 Nearly as tough and resilient as its close cousin the grey ironbark, red ironbark trees are an evergreen eucalyptus that grows to approximately 30 meters tall. Often called a mugga, mugga ironbark, or pink ironbark. The tree is especially hardy and can grow in some of the most desolate types of sandy soils.

Situated sporadically but widely in the eastern and southern regions of Australia and most commonly found in north-central Victoria, the western plains and slopes of New South Wales and southeast Queensland. Red ironbark trees have deeply furrowed bark so dark as to be almost black, though its upper limbs are smooth and appear closer to white in colour. Thanks to its black bark, any red kino – or plant gum – that appears on it contrasts sharply and makes it quite conspicuous.

Most commonly pale to rich red this timber can also skew into the brown colourations, with a moderately coarse but interlocking grain.  Red ironbark is most suited for solid timber flooring, especially thanks to its dark, rich rosy colour and extreme durability.

With a density of 1090 kg/m³ and a Janka dry hardness score of an impressively high 13. Red Ironbark is nearly identical to its cousin Grey Ironbark, while being slightly easier to work with, and providing different ranges of colour and hue. In fact, part of Red Ironbark’s charm is its variegated hues (especially when placed next to one another in flooring).

Despite these slight differences, red ironbark is incredibly resistant to termites as well, making it not just a handsome material but a highly durable one.

Despite these slight differences between it and other ironbark varietals, red ironbark is incredibly resistant to termites, making it not just a handsome material but a highly durable one.

These properties are only a guide, as timber is a natural product there will be variations within any species. The Janka Dry Hardness rating measures the hardness of the wood. The higher the number the harder the wood.

Do you want to use Red Ironbark Timber in your next project?

If you would like to use Red Ironbark Timber in your next flooring project and need assistance with either:

then please get in touch with one of our flooring specialists by clicking the button below.

We also offer a more personalised service for those looking for renovation advice. This is where our team come to your location and help you choose the best species and style to fit the room.

We would love to hear from you.